I showed mom the Bundle Monster plates, and 10 minutes later she had them ordered and on their way to me. Needless to say I was SO SO excited. This was mom's first stamping manicure.

I LOVED these manicures. Mom's was so pretty in person, and she would come home every day and tell me someone else who had commented her on them. I really want to do this manicure in red with a gold stamp.
Mine was fun and girly, but it made me really self conscious of how small my nails are as this is NOT suppose to take up the whole nail. But Jem was really shiny and I loved the look of it.
Which do you ladies like better?

Posted by paintedbluestars at 12:57 AM 38 comments:

September is not a fun month for most people. School starts back up, Moms send there babies off for the first time. People leave and go on business trips that will separate them from there families. It is also the month before the Holiday season starts.
September is also Ovarian Cancer Awareness month. Ovarian cancer is the leader in cancers that kill women in the United States. Unfortunately the warning signs of Ovarian Cancer are pretty common in women so a lot of them miss it until it is to late. But there are a few things you can do to be more prepared and in the know! I found a website that I think you ladies should go check out. Go check out Ovations and read stories of survivors, see what the warning signs are and maybe even donate a $1 towards finding a cure!
Now a few of you might be wondering why have I pulled my support for this and not one of the other worthy causes that have come up lately. Well I have PCOS, which I have known I have had since I was roughly 16 ( I am 27 now). PCOS is the MOST COMMON female endocrine disorder effecting 5% to 10% of females. This is a genetic disorder and will unfortunately most likely be pasted to children when and if I can have them. Some cases are more severe than others and the most talked about side effect of PCOS is infertility, but this can be usually be fixed with medical help. PCOS is believed to be linked to insulin and be an intolerance to such. So unfortunately weight gain and problems controlling your weight can be an issue and ultimately may cause diabetes. PCOS can also if not monitored lead to Ovarian Cancer, which is why September to me is Ovarian Cancer Awareness Month.
SO, as homage to all the brave ladies that fight Ovarian cancer as I sit here I started off September with the loudest most bright teal manicure I could do with the polishes I have. Which was cool as I had a few ladies at my work comment on them so I got to share why I had painted them that way:)

There you go ladies! Some teal for your eyes:) If you want to know any more about PCOS here is the wikipedia page. It is to the point and not to terribly dry of a read. I also wanted to mention that I was not sponsored or asked to do a write up by anyone. I don't even think Ovations know I exist. I just really believe in supporting this cause!

I will be back with a mom manicure later and some announcements!

Love you all and thanks for reading this long post!

Posted by paintedbluestars at 3:44 AM 5 comments:

I love olive green polishes. They look good with my skin tone ( I think) and it's not a color that people would normally associate with being beautiful and feminine. I love that, I love taking something you wouldn't assume to be one thing and making you see that it can be something you never thought it could be.
Mom ordered me this color; she thought I wanted Dree not Yara. It was actually the opposite, but now that I have Dree I don't really feel the need for Yara, I can put a glitter over Dree and get close enough for me.
The following pictures are 2 coats of Zoya's Dree. I loved it so much I actually used the color in my make up for work that day. I loved it! 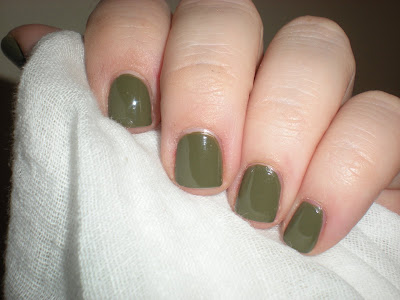 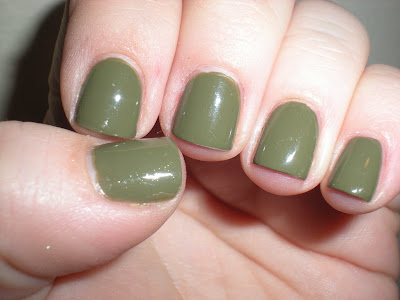 Now on to the Traci section of this blog:) If you read my blog you have probably heard mention of some groups on Facebook that I am part of. A big part of those two groups for me is Traci; Traci is sweet and helpful and is always there if you have a question. I <3 her! Anyways I though I would share her blog and thus give you guys access to her 1300 followers giveaway ( HOLY MOLEY). Now I am going to be honest, I want the prize for myself so part of me is sad showing other people. BUT there will be at least 1300 other people in it too, so what harm could  it do to spread the awesomeness that is Traci?
Here is her blog post about my most wanted lemming of all time....ATLANTIS. Then she does have her giveaway going on so I am sure you guys will want to check it out. Also make sure you actually check out here blog while you are there. It is awesome and she does some great stuff:)
Have a great week everyone! I know i will definitely strive to!

Love Ya'll!
Posted by paintedbluestars at 10:52 AM 5 comments:

It is the final installment!  This entry actually has 61 pictures, so I am warning you now this post is HUGE! I also want you all to know I am not putting this up to brag about the polishes I do have, or to show you what I don't have so you feel obligated to ask. That is definitely not the point in my putting up these blog posts. This is just fun and sharing!
My Third Drawer is Kind of my catch all for my smaller number collections and the few that are so large they wont fit in the other drawers...I did go to Michael's today and they STILL don't have the three drawer melmer back in stock. This is getting frustrating!
But anyways! Here is the last of my collection ( minus one I bought today...Buffy the Violet Slayer from Wet and Wild). Enjoy!


I also wanted to show you guys how they actually look in the drawers.

What do you think? See anything I am missing that I MUST have? Go ahead and leave a comment and let me know!

Posted by paintedbluestars at 12:54 AM 4 comments:

paintedbluestars
Just another girl who fell into the lure of pretty polishes and shiny things:) If you want to contact me email: forloveandpolish@gmail.com